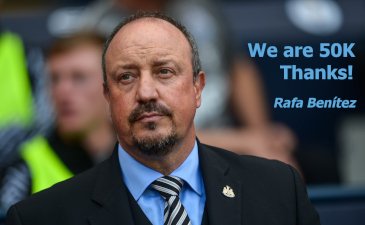 Speaking in a press conference, Benitez highlighted that Murphy’s loan deal was primarily focused on getting him more gametime and he could have a future at Tyneside next term. The Spaniard added that the same may be the case with Gayle, who has flourished for the Baggies with 17 goals in the current campaign.

He said: “He [Murphy] needed to play, obviously young players need to play and get experience. And it was difficult for him here. He is a nice lad and a good professional so hopefully he can do well and then we will consider his future. Dwight is doing really well. It’s good when players are doing well for their teams and you have to consider them for the future. OK, you never know what can happen but it’s good when they are doing well and enjoying themselves.”

Recent reports have suggested that both Gayle and Murphy could be offered to the west Midlands outfit in order to pursue Rondon on a permanent basis during the summer. However, such kind of an agreement remains far from assured, given the Baggies may want the services of Rondon, if they seal promotion from the Championship.

Meanwhile, it will be interesting to see whether Benitez will remain at the helm beyond the current campaign when his contract expires. Talks are already underway with the board over an extension but the manager may want more backing in the transfer market in order to push for a top of the table finish. The Magpies are currently on course to beat the Premier League drop with a seven-point advantage over 18th-placed Cardiff City.